Mr Merkaba is an advanced positron assault rifle invented by Kaolla Su and used in combat against Tsuruko Aoyama, Motoko Aoyama's elder sister, after Motoko herself was defeated in combat.

Inspite of the gun being nuclear charged, the rifle's blasts were easily deflected and/or evaded by Tsuruko. 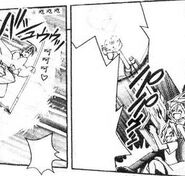 Add a photo to this gallery
Retrieved from "https://lovehina.fandom.com/wiki/Mr_Merkaba?oldid=15146"
Community content is available under CC-BY-SA unless otherwise noted.