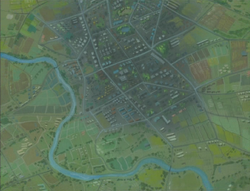 Nagoya (名古屋市 Nagoya-shi) is the third-largest incorporated city and the fourth most populous urban area in Japan.

Nagoya's two most famous sightseeing spots are Nagoya Castle and Atsuta Shrine.
Nagoya Castle was built in 1612. Although a large part of it burned down in the fires of World War II, the castle was restored in 1959. The castle is famous for possessing two Golden Orca statues on the roof, often used as the symbol of Nagoya.

Retrieved from "https://lovehina.fandom.com/wiki/Nagoya?oldid=15361"
Community content is available under CC-BY-SA unless otherwise noted.