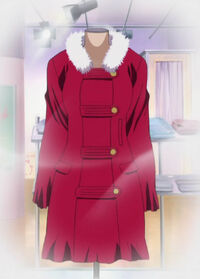 Naru's Jacket was a red "Christmas-Themed" over-coat. It was a present given to Naru Narusegawa by Keitaro Urashima on Christmas.

Bought while buying presents for the other Hinata Residents, Keitaro became involved in a conflict between Naru, himself, and Mutsumi Otohime when the former discovered that the latter may have been Keitaro's Promise Girl.

In the anime, Keitaro took up a part-time job selling Christmas Cakes alongside Shirai and Haitani in order to afford the jacket. After he obtained it, Keitaro abandoned the present after he thought that Naru had chosen Noriyasu Seta over him. However, Motoko Aoyama retrieved the present and gave it to Naru, who spent the rest of the night attempting to find Keitaro and met him in Shibuya on Christmas night and wore the jacket. 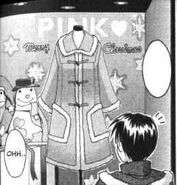 Retrieved from "https://lovehina.fandom.com/wiki/Naru%27s_Jacket?oldid=15683"
Community content is available under CC-BY-SA unless otherwise noted.