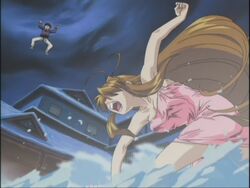 The Naru Punch was the signature "attack" of Naru Narusegawa.
Essentially a punch of colossal power due to the anger in which it was delivered, the Naru Punch was frequently delivered to Keitaro Urashima due to Naru's tendency to overreact to situations involving Keitaro.

In Episode 24 of Ground Defense Force! Mao-chan, Mao was seen watching a scene from the Love Hina anime with Naru unleashing a Naru Punch on Keitaro.

Retrieved from "https://lovehina.fandom.com/wiki/Naru_Punch?oldid=15686"
Community content is available under CC-BY-SA unless otherwise noted.