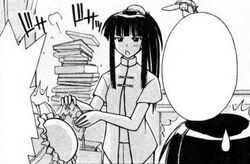 While usually studying seperately, the group attempted to study together during Keitaro's pursuit of Naru through northern Japan, however Keitaro was too distracted to be of assistance.

Retrieved from "https://lovehina.fandom.com/wiki/Neo_Roninz?oldid=5808"
Community content is available under CC-BY-SA unless otherwise noted.