HINATA 025. When the Cherry Blossoms Bloom

An exceptionally skilled martial artist and possessing near indestructibility, Seta spends a good deal of his time traveling the world on various expeditions. His goal is to find evidence of the ancient Turtle Civilization that once flourished throughout east Asia.

Happy-go-lucky, gullible and sometimes clueless, Seta is the tallest member of the Love Hina cast. Constantly seen in a white lab coat, Seta usually sports a tan due to his outdoor excavations and wears glasses due to poor eyesight.


A veritable "Indiana Jones", Seta possesses a smoking habit and a tendency to become distracted by whatever project he's working on.

Despite his childish and care-free nature, Seta possesses a startling wisdom which he often shares with Keitaro when the latter is feeling lost or down.


In spite of the glasses, Seta is a terrible driver; often crashing his van in spectacular fashion.

While failing the entrance exam three times, Seta was eventually accepted into Tokyo University where he met Haruka Urashima and Sarah McDougal's mother, who were also attending the university. Working as his excavation assistants, the trio traveled across the globe, becoming embroiled in various adventures. After the three become a love triangle, Seta makes a promise that, by the time he was thirty, he would make up his mind and choose one of them as his love, however, Sarah's mother passed away soon after that promise. The relationship between Haruka and Seta deteriorated soon after and Haruka returned to work at the Hinata Inn while Seta continued his excavations and adventures.


With her failing grades, Naru Narusegawa, a resident of the Hinata House, receives tutorship from Seta. While her grades begin to climb she starts to harbor affection for her tutor, however, Seta suddenly leaves Japan soon after.


Upon returning to Japan, Seta gets work at Tokyo University as the on campus archaeology professor; however, due to his poor pay, he and Sarah resort to camping on the university grounds for house and board. paid a visit to Hinata House and became reacquainted with Naru and Mitsune, the former of which still harbored a crush for him. While the Hinata residents attempt to deal with Naru's crush; during a summer play rendition of the Journey to the West, Motoko Aoyama challenges Seta to a duel in which Seta defeats her despite possessing no weapons.


Finally turning thirty, Seta honors his promise and returns to the Hinata House and to Haruka, however Haruka, still sore from the circumstances surrounding the promise, vehemently refuses him and denies any kind of relationship between them. After Naru and Keitaro's meddling, she at least temporarily accepts his offered ring.


When Keitaro is abducted by Seta to return an artifact to the Kingdom of Molmol, Haruka follows after the Hinata girls who wish to take advantage of a contract by Hina Urashima in a last ditch effort to be wed Keitaro. Arriving at Molmol to discover Keitaro now captured by Kaolla, Haruka joins Seta on his plane and the pair rescue Keitaro and Naru after they parachute from the Amallan Kaollan.


Continuing on Seta's mission to return the artifact, the couples discover the honeymoon capital Todai and reignite their respective relationships.


The following day, Haruka and Seta decided to stay to excavate the ruins while the Hinata girls and Keitaro returned to Hinata to see Hina.

Seta's initial design was inspired by Ryoji Kaji from Neon Genesis Evangelion and Spike Spiegel from Cowboy Bebop, which resulted in his knowledge of martial arts and his five o'clock shadow.
Seta's name was derived from the name of manga artist Noriyasu Seta.

Ken Akamatsu has admitted that he had no idea whether Tokyo University actually held lectures on Archaeology while creating the premise as part of Seta's backstory. 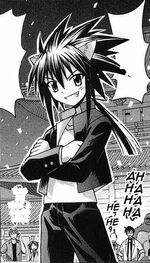 Seta makes a cameo appearance in the crowd during the Mahora Festival fighter's tournament in Negima! Magister Negi Magi.

Retrieved from "https://lovehina.fandom.com/wiki/Noriyasu_Seta?oldid=15913"
Community content is available under CC-BY-SA unless otherwise noted.