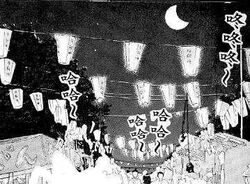 Obon is a Japanese Buddhist custom to honor the spirits of one's ancestors. This Buddhist-Confucian custom has evolved into a family reunion holiday during which people return to ancestral family places and visit and clean their ancestors' graves. It is also the time when the spirits of ancestors are supposed to revisit the household altars.

The festival of Obon lasts for three days; however its starting date varies within different regions of Japan due to when the lunar calendar was changed to the Gregorian calendar at the beginning of the Meiji era.

Maha Maudgalyayana (Mokuren), a disciple of the Buddha, used his supernatural powers to look upon his deceased mother. He discovered she had fallen into the Realm of Hungry Ghosts and was suffering. Greatly disturbed, he went to the Buddha and asked how he could release his mother from this realm. Buddha instructed him to make offerings to the many Buddhist monks who had just completed their summer retreat, on the fifteenth day of the seventh month. The disciple did this and, thus, saw his mother's release. He also began to see the true nature of her past unselfishness and the many sacrifices that she had made for him. The disciple, happy because of his mother's release and grateful for his mother's kindness, danced with joy. From this dance of joy comes Bon Odori or "Bon Dance", a time in which ancestors and their sacrifices are remembered and appreciated.

Retrieved from "https://lovehina.fandom.com/wiki/Obon_Festival?oldid=11162"
Community content is available under CC-BY-SA unless otherwise noted.