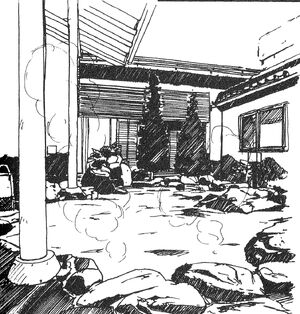 An Onsen (温泉) is a term for hot springs in the Japanese language, though the term is often used to describe the bathing facilities and inns around the hot springs. As a volcanically active country, Japan has thousands of onsen scattered along its length and breadth. Onsen were traditionally used as public bathing places and today play a central role in directing Japanese domestic tourism.

Onsen are a central feature of Japanese tourism often found out in the countryside but there are a number of popular establishments still found within major cities. They are a major tourist attraction drawing Japanese couples, families or company groups who want to get away from the hectic life of the city to relax. Traditionally, men and women bathed together but single-sex bathing has become legalized as the norm since the opening of Japan to the West during the Meiji period. Mixed-sex bathing persists at some special onsen (konyoku) in the rural areas of Japan, which usually also provide the option of separate "women-only" baths or different hours for the two sexes. Children of either sex may be seen in both the men's and the women's baths.

In A.I. Love You, the cast visits a natural hot springs in the mountains near Tokyo Kimika's Summer Home, in addition the cast also visits the Kobe Onsen ryoken and the Degarashi Hot Springs resort.

Retrieved from "https://lovehina.fandom.com/wiki/Onsen?oldid=15733"
Community content is available under CC-BY-SA unless otherwise noted.