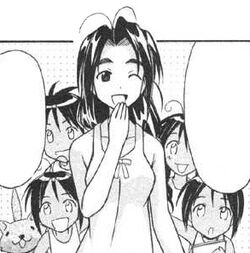 The Otohime Family is a slightly eccentric Japanese family-line in Love Hina, noted for living in Okinawa and possessing ownership of a hotel on the island.
With the family descending from the Urashima Family line, Natsumi Otohime worked at the Hinata Inn for a period of time under Hina Urashima before moving to Okinawa to run her own, family-run, holiday lodge with "Uncle" (Natsumi's brother-in-law). Her daughter, Mutsumi Otohime, moved with her; years later returning to join her childhood friends, Keitaro Urashima and Naru Narusegawa, in attempting to study at Tokyo University.
During her daughter’s attempts, Natsumi mothered seven other children, all of which stay with her on Okinawa.

Retrieved from "https://lovehina.fandom.com/wiki/Otohime_Family?oldid=12620"
Community content is available under CC-BY-SA unless otherwise noted.