Pararakelse is a tropical island located in the South Pacific near the international date line next to Molmol.
Estimated to be near the epicentre of what was once an empire centred on the worship of turtles, Pararakelse has become the focus of Noriyasu Seta's dream of discovering the ancient Turtle Civilization.

Keitaro first came here when he believed he had failed the Tokyo University Exam for the fourth time, trying to escape from his old life he took a ship that he believed was going north, but it was actually going to a tropical tourist attraction to the south.
Falling overboard, Keitaro washed ashore on Parakelelese where he ran into Noriyasu Seta who then offered him to be his assistant while he ran an excavation on the island. Sending a fax back to Hinata House saying that he was in the middle of the Pacific Ocean, Keitaro's sudden trip was ill-received, with Naru embarking to bring him back. After discovering that both Naru and Keitaro had passed the Tokyo University entrance exams, the remaining Hinata House residents also embarked to Pararakelse to get Keitaro back to Japan before he misses the university acceptance deadline.

The opening shot of Pararakelse Island where Keitaro washes ashore is based on the appearance of "Bird Island" in Saipan. 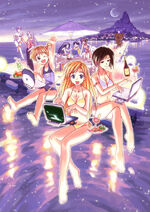 The main cast of A.I. Love You appears on Pararakelse Island at the same resort where Naru, Keitaro and Mutsumi celebrate their acceptance into Tokyo University in a promotional image for the series' re-release in 2003.

Retrieved from "https://lovehina.fandom.com/wiki/Pararakelse_Island?oldid=15229"
Community content is available under CC-BY-SA unless otherwise noted.