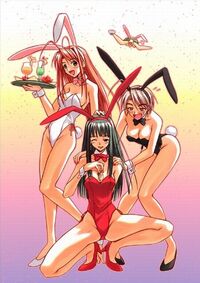 The Playboy Bunny Suit is the bunny-themed uniform of the waitresses of the Playboy Club. Dubbed the "Bunny Suit", with the waitresses being referred to as "Bunnies", the uniform consists of a strapless corset teddy, bunny ears, black pantyhose, a collar, cuffs and a fluffy cottontail. It is inspired by the tuxedo-wearing Playboy rabbit mascot.

The suit is very popular in Japan, where it has lost much of its association with Playboy and has instead become associated with sexiness in general. It has also obtained an association with the female human/animal hybrids common in anime and manga known as kemonomimi alongside other animal-themed garments. 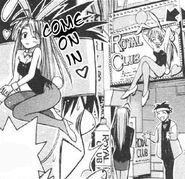 Retrieved from "https://lovehina.fandom.com/wiki/Playboy_Bunny_Suit?oldid=14437"
Community content is available under CC-BY-SA unless otherwise noted.