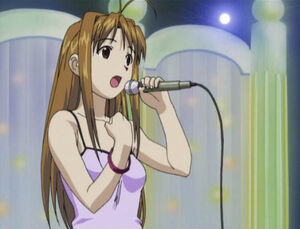 In Japanese culture, Pop Idols are usually female media personalities in their teens and early twenties who are considered particularly attractive or cute and who will, for a period ranging from several months to a few years, regularly appear in the mass media, as singers for J-pop groups, bit-part actors, TV personalities, models in photo spreads published in magazines, advertisements, etc.

It is commonly said female Japanese idols represent the perfect female form in Japanese society. For this reason they are often idolized by both males and females. Audiences spend their time imitating their style, hair color, fashion, etc, and are fed with detailed information about the idol's measurements, favorite colours, food, hobbies, blood type, etc.

The idol phenomenon began during the early seventies, with the introduction of the musician Sylvie Vartan in the French film Cherchez l'idole in 1963. The term "Idol" came to be applied to any cute female actress or singer. Teenage girls, mostly between 14 and 16, began rising to stardom.
In the 1970s, idols had an aura of mystique that left much of their lifestyles secret. Their public and "private" lives were carefully orchestrated—they always appeared perfect in all situations and seemed to enjoy a lavish lifestyle that most Japanese could only dream about. In reality, however, they were placed under continuous surveillance by their promoters and were unable to enjoy the private lives invented for them. Their pay was surprisingly low. They were often overworked and even if their songs sold well most of the money went to the musicians and writers. Fans had few opportunities to see them beyond a few minutes on TV or radio and it was difficult to share their interests. Magazines were the best source for information and many idols had an official fan club that periodically mailed what little information could be released.

Idols dominated the pop music scene in the 80s; this period becoming known as the "Golden Age of Idols in Japan". In a single year, as many as 40 or 50 new idols could appear, only to disappear from the public spotlight shortly afterwards.
In the 1980s, idols became much closer to average Japanese people; this is likely because the average lifestyle of the Japanese improved. While still tightly controlled, idols were allowed to show more of their actual personalities and were permitted to let out some carefully scripted outbursts. The media often fabricated "competitions" between two or more idols, based on things like the number of records sold, the number of fans in the official fan club, etc. In the late 1980s, instead of relying on magazines and TV, some started experimenting with new media and technologies like video games, with mixed results. The working conditions of idols improved and even those with limited success could live modestly and more of the money made was paid to idols themselves, though they still only received a small portion.

In the 1990s, instead of being marketed as people who lived better and were better than average, idols became people who just happened to have a little something to become popular. Where the tastes of past idols had to be saccharine, it was now acceptable for an idol to simply love eating ramen or to display something other than a smile, to lament having got a little out of shape or to admit to shopping around for lower prices. Idols also became a fixture in countless anime by singing opening or ending songs that have little relevance to the anime itself. Some experimented with being seiyu, and seiyu themselves became somewhat like idols, becoming increasingly popular. Even today, some are still involved with the video game industry, though they are not always entirely successful.
In the 90s, the power of Japanese idols began to wane, as the music industry shifted towards rock musicians and singers for whom music was a more important sales point than looks or wholesomeness.

A new genre of idols called Net Idols became known in the late 1990s, only appearing on websites. In 1997 there appeared the first "cyber idol" or "virtual idol". A fabricated person with a fabricated history and statistics and her own songs.

Retrieved from "https://lovehina.fandom.com/wiki/Pop_Idol?oldid=12391"
Community content is available under CC-BY-SA unless otherwise noted.