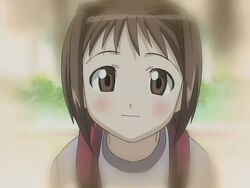 "Hey, did you know that if two people who love each other go to Tokyo University, they’ll live happily ever after?"
—

The Promise Girl is Keitaro's Childhood friend who he can't remember either the name or the face of, but they made a promise 15 years ago to get into the Tokyo University (Todai) together when they grew up. She is the sole driving force for Keitaro's determination to pass the entrance exam and be admitted to Tokyo University. Her identity is a mystery until late in the manga, while her identity in the anime is still in ambiguity.

The Promise Girl is later believed to be Mutsumi, after Naru finds Mutsumi's name on Liddo-kun, however, in Love Hina X-Mas Special: Silent Eve, Mutsumi confirms that it's not her as she only knew about Keitaro's Promise because she heard him talk about it later. Granny Hina confirmed that she knows who she actually is, but since Naru punches Keitaro's cellphone just as she is about to say it, her identity is still unconfirmed.

In the beginning, Keitaro believed that Naru was his Promise Girl due to hints about Naru keeping a promise to reach Toudai, as well as a diary entry he accidentally peeked at. However, Naru clears it up and says she couldn't possibly be the Promise Girl because 15 years ago, she was only 2 years old; her promise was also made to her tutor. This revelation broke Keitaro's spirit and left the Promise Girl's identity in ambiguity for some time to come.

Later on, it is strongly implied that Mutsumi is the girl from Keitaro's memories. The coincidences of their personalities, hobbies, and Mutsumi being a prior Hinata resident as well as her reasons for going to Toudai strongly encourages this. Mutsumi's is also genuinely and openly affectionate towards Keitaro, and states many times that she really likes him. This causes a lot of romantic friction between Keitaro, Naru and Mutsumi, even though they continue being good friends.

As the entrance exam dawns upon them and Keitaro being torn between his promise and his feelings for Naru, he goes up to Mutsumi to confess his true feelings. However, Mutsumi confirms she was a girl in Keitaro's past, but his memories/fantasies slightly differed from what actually transpired. While they were playing in the sandbox, then 2-year old Naru was introduced to them by her father. Mutsumi asked if Keitaro liked Naru, to which he said yes. Mutsumi then told Keitaro if she liked her he should make a promise to Naru to go to Tokyo U (Todai) when they grow up. When Keitaro later left Hinata Inn, Mutsumi subsequently promised Naru that they will both go to Tokyo U to reaffirm Keitaro's forgotten promise.

Towards the final chapters of the manga, Keitaro and Naru are finally set on going to Toudai together. However, an unexpected phone call from Grandma Hinata interrupts the happy moment. Hinata then begins to tell Keitaro of the Promise Girl from his childhood. But shortly before Hinata could reveal who it was, Naru suddenly interrupts the phone call. A visibly disappointed Keitaro asks why, while Naru anxiously explains that there could be no other Promise Girl but her - and if there is, then everything they've been through has been for nothing. On top of that, Keitaro's reaction to the call confirmed her insecurities. Understanding the situation, Keitaro apologizes and does everything he can to reassure Naru that they belong together. Unfortunately, several mishaps occur along the way, leading Naru to believe that regardless of their feelings towards each other, fate is keeping them apart because she's not the Promise Girl.

Unbeknownst to Keitaro, Naru runs away from Hinata Inn to escape from everything. Keitaro desperately chases her down and confronts her on a train. After riding together for several hours, Naru has a dream that is a flashback of her entire life, up to the sandbox that her, Keitaro and Mutsumi played in as children. Naru explains to the children that they didn't end up finding happiness after all; the children disagree, saying that they actually look happy as it is.

Upon waking up, Keitaro and Naru are stuck in the closed train at the station. They then begin hearing Grandma Hinata's voice creepily on the PA. Keitaro and Naru run in horror, only to find themselves back at Hinata Inn. As Grandma Hina is finally about to reveal who the Promise Girl is, Keitaro stands up and passionately exclaims it doesn't matter who it is at this point, because the person he loves more than any other is Naru. Naru joins Keitaro and also passionately exclaims that she loves Keitaro back, and can't imagine her life without him. They then say no matter what happens afterwards, as long as they both go to Toudai together, they will find happiness.

As the sun rises, all of the Hinata residents return from their respective leaves. Keitaro and Naru both explode in happiness at everyone's return. Suddenly, the couple sees Grandma Hina on the roof with Kanako, ready to depart on a helicopter. As they both go up to confront her, Grandma Hina tells them that their speech made her flustered and touched her deeply. She then tells Keitaro, "Silly boy, your Promised Girl has been beside you all this time." Keitaro and Naru look at each other briefly as Grandma Hina flies off on the helicopter, and the entire Hinata gang storms the roof.

It is confirmed three times that Naru is, without a doubt, the Promise Girl:

Retrieved from "https://lovehina.fandom.com/wiki/Promise_Girl?oldid=16220"
Community content is available under CC-BY-SA unless otherwise noted.