Proton Packs, known as an Ectoplasma Laser in the anime, are specialized laser rifles intended for combatting spirits and ectoplasmic creatures.

Following a misunderstanding where Kanako Urashima had molested the Hinata Residents while disguised as Naru, Kaolla and Sarah wield Proton Packs to aid Motoko in attacking Naru, who they thought had been possessed by an evil spirit. 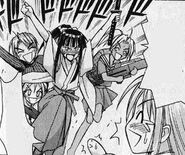 Retrieved from "https://lovehina.fandom.com/wiki/Proton_Packs?oldid=11590"
Community content is available under CC-BY-SA unless otherwise noted.