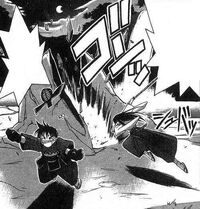 Rock Splitting Sword, also known as Zanganken, is a secret technique used by the Shinmei-ryu School of Swordsmanship and a signature attack of Motoko Aoyama.
Rock Splitting Sword is a long-range ki attack strong enough to immediately destroy a boulder, hence the name. This attack is what Motoko most commonly uses on Keitaro, to the point that he learns to use it himself through the excessive experiences.

In Negima! Magister Negi Magi, Setsuna Sakurazaki uses Rock Splitting Sword, along with several other of the Shinmeryu Secret Arts, in her frequent battles throughout the manga. Rock Splitting Sword is the first skill she is seen using and is the most frequently used technique of Setsuna's from Motoko's skillset

Add a photo to this gallery
Retrieved from "https://lovehina.fandom.com/wiki/Rock_Splitting_Sword?oldid=13436"
Community content is available under CC-BY-SA unless otherwise noted.