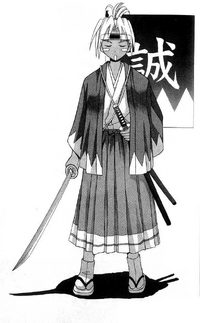 Samurai (侍) were the military nobility of pre-industrial Japan and became known as the country's elite warriors in the battlefield.
By the end of the 12th century, Samurai became almost entirely synonymous with Bushi (Japanese warriors), and the word was closely associated with the middle and upper echelons of the warrior class. The samurai followed a set of rules that came to be known as Bushidō. While they numbered less than 10% of Japan's population, samurai teachings can still be found today in both everyday life and in modern Japanese martial arts.

As de facto aristocrats for centuries, samurai developed their own culture that melded with their warrior lifestyles. The Tea Ceremony, Monochrome ink painting, Rock gardens and Poetry were some of the cultural endevours adopted by warrior patrons.

Retrieved from "https://lovehina.fandom.com/wiki/Samurai?oldid=14074"
Community content is available under CC-BY-SA unless otherwise noted.