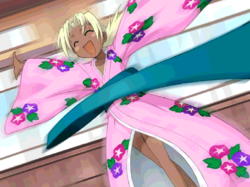 The Sash Pull (帯まわし (Obimawashi (Obi spin)) is a routine where a lecherous magistrate will assail a woman by grabbing the back of her Obi (a sash that is wrapped around the waist of a Kimono) and yank it open so forcefully as to cause her to spin around. Most often this is accompanied by the victim exclaiming "Are!?" (a typical sound of surprise) while being spun.

The routine appears in various period pieces and plays to demonstrate the magistrate's lechery. It has since become a staple routine in Fanservice and general comedy as, although the action can be seen as a precourser to rape (and so it does in most serious pieces), in comedy routines most often the magistrate is actually after the Obi and pays the now-disclothed woman no mind after the deed.

Add a photo to this gallery
Retrieved from "https://lovehina.fandom.com/wiki/Sash_Pull?oldid=14714"
Community content is available under CC-BY-SA unless otherwise noted.