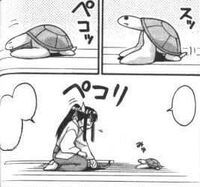 Seiza (正座, literally "proper sitting") is the one of the traditional ways of sitting in Japan.
The position involves an individual kneeling with knees together on the floor with their buttocks sitting over the heels of their feet, which are flat against the floor with their toes pointing behind them.

The development of the tatami mat in the Muromachi period (1336–1573) in addition to the strict laws of etiquette at the time saw the adoption of the sitting posture known today as seiza as the formal sitting position. However, by the end of the 20th century and the adoption of many westernized architectures such as chairs and hard wooden floors, the seiza position became uncommon and consequently many Japanese are now unaccustomed to sitting seiza

Regardless, seiza is still an integral part of several traditional arts such as the Tea Ceremony, Calligraphy and Ikebana (flower arranging), in addition to several martial arts such as Karate, Aikido and Iaido.

In Negima! Magister Negi Magi, Class 3-A is caught out of bed after lights out during their school trip in Kyoto. As punishment, Nitta makes them all sit in Seiza for an hour.

Retrieved from "https://lovehina.fandom.com/wiki/Seiza?oldid=15438"
Community content is available under CC-BY-SA unless otherwise noted.