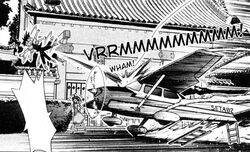 Seta 02 is a light-weight propeller aircraft flown by Seta during the race to the Todai Ruins in the Kingdom of Molmol Island.

Possessing no weaponry the aircraft non-the-less managed to survive repeated encounters with the Royal Molmol Air Force's third mobile fleet thanks to its pilot before taking a glancing hit from the Amallan Kaollan and crash landing while entering the ruins.

Add a photo to this gallery
Retrieved from "https://lovehina.fandom.com/wiki/Seta_02?oldid=11151"
Community content is available under CC-BY-SA unless otherwise noted.