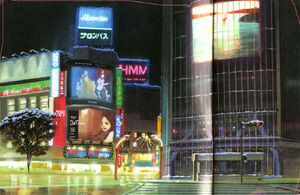 The Shibuya Shopping District is a shopping district which surrounds Shibuya Station, one of the busiest railway stations, in Tokyo, Japan.
The district is known as one of the fashion centers of Japan, as a major nightlife area, and as one of the more famous areas in Tokyo alongside Harajuku (which is also located within Shibuya ward), Akihabara and Shinjuku.

A popular shopping and entertainment district among young people, there are several famous fashion department stores within the district, including Shibuya 109; a major shopping center near Shibuya Station which became particularly famous as the origin of the Kogal subculture. Other famous locations in the district include the NHK Broadcasting Center and the Omotesandō avenue which leads up to Yoyogi Park and the Meiji Shrine; dedicated to the souls of Emperor Meiji and Empress Shōken.

Following the opening of the Yamanote Line in 1885, Shibuya began to emerge as a railway terminal for southwestern Tokyo and eventually as a major commercial and entertainment center during and following the 1964 Tokyo Olympic games.
Shibuya has been the center of youth culture and street fashion since the 1970s when college-age women began gathering in the district to shop for the latest fashion by the 1980s high-school girls began overtaking college-goers in regards to numbers within the district and by the 1990s middle-school girls became the district's primary shopping market.

During the late 1990s, Shibuya became known as the center of the IT industry in Japan. It was often called "Bit Valley" in English, a pun on both "Bitter Valley," the literal translation of "Shibuya", as well as Bit, the computer term for binary digits.

Nicknamed "Scramble Crossing", the Shibuya pedestrian street crossing outside Shibuya Station is the busiest street crossing in the world, located in front of the Shibuya Station Hachikō Square exit.
Three large television screens mounted on surrounding buildings overlook the crossing, as well as many advertising signs. Its heavy traffic and inundation of advertising has led to it being compared to the Times Square intersection in New York City.

The Shibuya Shopping District is based on the real life location.
The underpass Keitaro and Mustumi take to the Tokyo University induction ceremony is based on Shibuya Station. The appearance of the Hinata Aquarium is also based on the Children's Castle building in Shibuya.

Retrieved from "https://lovehina.fandom.com/wiki/Shibuya?oldid=15423"
Community content is available under CC-BY-SA unless otherwise noted.