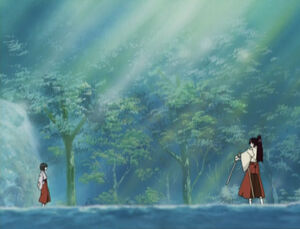 Shinmei-ryū (神鳴流 shinmei-ryū "Gods'-Cry School") is the name of a legendary organization of swordswomen that reside in the mountains of Kyoto. The organization practises a style of Japanese kenjutsu that goes by the same name.
Practitioners are characterised as traditional Japanese swordswomen in red and white hakuma, wielding energy attacks and swords made out of white wood, the style is most notable for appearing in two of Ken Akamatsu’s more prominent works (Love Hina and Negima! Magister Negi Magi).

Originally created as a combat troop with unparalleled power to protect Kyoto and avenge misused magic, the Shinmei-ryū troop were also made guardians of the Japanese talisman users; assisting the onmyou wizards as bodyguards during magic wars.

In modern times the Shinmei-ryū are often acting as expert demon slayers and exorcists, the swordswomen of Shinmei-ryū are adept at using their ki energy in combat and also act as aides or hired mercenaries to the Kansai Magic Association with whom they have long-standing ties. In the past, the partnership of the Shinmei-ryū's swordsmanship and Kansai's traditional magic was a formidable combination.
While the school and Shinmei-ryu Dojo were originally owned and run by the Aoyama family, the school was eventually declared a national landmark and became the formal property of the government of Japan.

The Shinmei-ryū school weapons-of-choice are primarily based around the katana, kodachi and nodachi. However, practitioners are expected to be adept in unarmed combat and other general weapons aside from their sword. Along with formidable physical combat skills, Shinmei-ryū warriors also possess knowledge of eastern magic; possessing the ability to learn onmyōdō magic (traditional Japanese yin-yang magic) and use shikigami (special constructs of limited intelligence made of paper and controlled by magic).
As their primary skill’s are based on their ki, Shinmei-ryū practitioners may be skilled with whatever weaponry they have on hand, be they swords, knives, deck brushes or chopsticks. Highly skilled practitioners can channel their attacks without the use of a weapon, simply using their bare hands.
Another noteworthy trait is that, when a practitioner reaches a certain point in their abilities, Shinmei-ryū users take on the resemblance of demons, particularly seen in the eyes, during combat.

Retrieved from "https://lovehina.fandom.com/wiki/Shinmei-ryu?oldid=14230"
Community content is available under CC-BY-SA unless otherwise noted.