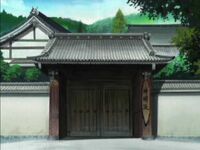 The Shinmei-ryu School Dojo is a large family-run martial arts dojo owned and run by the Aoyama family.

Originally a privately owned establishment, with ownership passed down between the Aoyama family members, the school was designated a national landmark by the Japanese government on 2001 and became government property.

The appearance of the Shinmei-ryu dojo is based on the family temple of the Ashikaga shogunate on the Kinugasa mountain in Kyoto. The temple was founded by former shogunate, Takashi Ashikaga.

Retrieved from "https://lovehina.fandom.com/wiki/Shinmei-ryu_Dojo?oldid=10065"
Community content is available under CC-BY-SA unless otherwise noted.