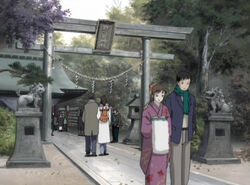 Shinto or Shintoism, also kami-no-michi (Way of the Gods), is the indigenous religion of Japan and the Japanese people.

In modern times it is a set of practices, to be carried out diligently, to establish a connection between present day Japan and its ancient past through the study and reverence of spirits known as kami. Kami are "spirits", "essences" or "deities", that are associated with many subjects; in some cases being human-like, in others being animistic, and others being associated with more abstract "natural" forces in the world (mountains, rivers, lightning, wind, waves, trees, rocks). Kami and people are not separated like in other religions; they exist within the same world and share its interrelated complexity.

The vast majority of Japanese people who take part in Shinto rituals also practice Buddhist ancestor worship. Due to the syncretic nature of Shinto and Buddhism, most "life" events are handled by Shinto and "death" or "afterlife" events are handled by Buddhism; for example, it is typical in Japan to register or celebrate a birth at a Shinto shrine, while funeral arrangements are generally dictated by Buddhist tradition—although the division is not exclusive.

The principal worship of kami is done at public shrines or worship at small home shrines called kamidana. The public shrine is a building or place that functions as a conduit for kami. Certain natural places, such as sacred groves of trees, mountains, or waterfalls can also be considered shrines called mori. All shrines are open to the public at some times or throughout the year.

Entrances to Shinto shrines are fronted by a distinctive Japanese gate (torii) made of two uprights beams and two crossbars denoting the separation between common space and sacred space.

There are a number of symbolic and real barriers that exist between the normal world and the shrine grounds including: statues of protection, gates, fences, ropes, and other delineations of ordinary to sacred space. Usually there will be only one or sometimes two approaches to the Shrine for the public and all will have the torii over the way.

Shrines are private institutions, and are supported financially by the congregation and visitors. As a further means of income, some shrines host festivals that attract hundreds of thousands visitors, especially in the New Year season.

Retrieved from "https://lovehina.fandom.com/wiki/Shinto?oldid=15711"
Community content is available under CC-BY-SA unless otherwise noted.