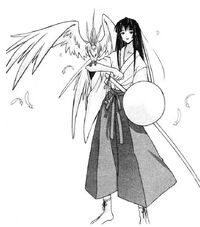 Shippu is a yellow crane that accompanies Tsuruko Aoyama in her travels as her avian companion.
As Motoko Aoyama succeeded in her struggles with her feelings towards Keitaro, Tsuruko intrusted Shippu to her; gaining a new, purple, crane named Hayate for herself.

Retrieved from "https://lovehina.fandom.com/wiki/Shippu?oldid=16186"
Community content is available under CC-BY-SA unless otherwise noted.