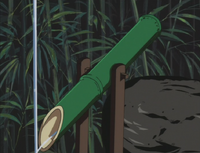 Shishi-Odoshi, aka Deer Chaser Fountain, is a unique Japanese water fountain that was originally created to scare away birds and animals that may do damage to gardens.

The fountain consists of a segmented tube positioned upon a stone or hard surface and held at an angle by a pivoting support. With one end of the tube blocked and weighted, the open end is positioned under a stream of water. As time passes the tube will fill and cause the tube to pivot on its axis to dump the water, as the water is released the weighted end causes the tube to pivot back to its original position. The resulting sound of the weighted end hitting the stone or hard surface startles any skittish herbivores in the area; such as deer or boars, that may be grazing on plants in the garden.

Historically these fountains were designed and used by Japanese rice farmers to scare away birds and deer from their rice paddies. In modern times the sound of these fountains have been found to have therapeutic properties and are also used as water features in gardens, medical centers and ceremonial tea gardens.

Retrieved from "https://lovehina.fandom.com/wiki/Shishi-odoshi?oldid=15765"
Community content is available under CC-BY-SA unless otherwise noted.