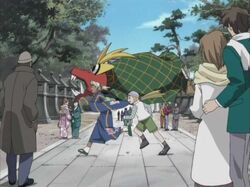 The Shishi-mai (Guardian Lion Dance) is a traditional dance in Japan in which performers wear a lion costume and mimic a lion's movements to music. The dance is usually performed as part of New Year's celebrations as well as other traditional, cultural and religious festivals. It may also be performed at many other important occasions such as business opening events, special celebrations or wedding ceremonies.

Based on the legends of the lion-like Komainu statues that stand guard at the entrances of or within the grounds of Shinto shrines to ward off evil spirits, there are a great number of different shishimai dances in Japan and the style of dancing and design of the lion differs by region but they all serve the same purpose to ward off evil and bring good fortune. At the end of the dance, the lion "bites" the heads of some watchers, to bring further good luck.
The lion costume mainly consists of a wooden, lacquered head called a shishi-gashira (Lion Head), and a "body" of green cloth with white patterns. It can be manipulated by a single person, or two to three persons, depending on the type of dance they wish to perform. 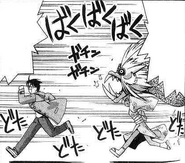 Retrieved from "https://lovehina.fandom.com/wiki/Shishimai?oldid=12905"
Community content is available under CC-BY-SA unless otherwise noted.