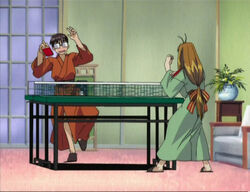 Table Tennis, also known as Ping-pong, is a sport in which two or four players hit a lightweight, hollow ball back and forth using table tennis rackets.
The game takes place on a hard table divided by a net. Except for the initial serve, players must allow a ball played toward them only one bounce on their side of the table and must return it so that it bounces on the opposite side. Points are scored when a player fails to return the ball within the rules.

Retrieved from "https://lovehina.fandom.com/wiki/Table_Tennis?oldid=14090"
Community content is available under CC-BY-SA unless otherwise noted.