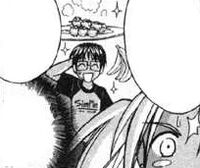 Takoyaki (たこ焼き or 蛸焼) is a ball-shaped snack made of a wheat flour-based batter and cooked in a special takoyaki pan. It is typically filled with minced or diced octopus, tempura scraps, pickled ginger, and green onion, and are then brushed with takoyaki sauce (similar to Worcestershire sauce), mayonnaise and sprinkled with green laver and shavings of dried bonito.

Takoyaki was first popularized in Osaka, where a street vendor named Tomekichi Endo is credited with its invention in 1935. Takoyaki are inspired by Akashiyaki; a small round dumpling from the city of Akashi in Hyōgo Prefecture made of an egg-rich batter and octopus.
Takoyaki was initially popular in the Kansai region, but later spread to the Kantō region and other areas of Japan. Takoyaki is now sold at commercial outlets, such as supermarkets and 24-hour convenience stores.

Add a photo to this gallery
Retrieved from "https://lovehina.fandom.com/wiki/Takoyaki?oldid=14155"
Community content is available under CC-BY-SA unless otherwise noted.