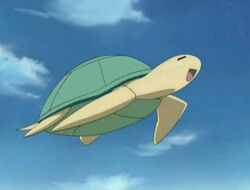 Tamago Onsen (Onsen Tamago (Hotsprings Egg)) (usually referred to as simply Tama or Tama-chan) is a Hot Springs Turtle that, due to his popularity, serves as the unofficial animal mascot of the Love Hina series alongside Liddo-kun. He was originally given as a present to Keitaro Urashima and Naru Narusegawa by Mutsumi Otohime at the end of their trip through southern Japan, however, he has since been adopted as a pet of the entire Hinata Inn residents.

Able to fly, capable of reaching a top speed of 60kph, Tama can also write, practise mathematics, is skilled in self defense and can communicate with other humans either through repeated motions or through Turtlese.

Tama was initially supposed to be a cat; the pet of Haruka Urashima's child, the cat was always chasing a hamster around on the ground floor. The cat, the hamster and Haruka's child were cut, but the name moved to the turtle.

During the period in which chapter 26 of the manga was released, Ken Akamatsu issued a name-suggestion competition in Shonen Magazine. With the winner having their suggested name being used as the name of then-unnamed Tama.

Tama has one theme from the Love Hina anime series, "Tama's Theme", which is available in the Love Hina Original Sound File soundtrack.

Retrieved from "https://lovehina.fandom.com/wiki/Tamago_Onsen?oldid=15926"
Community content is available under CC-BY-SA unless otherwise noted.