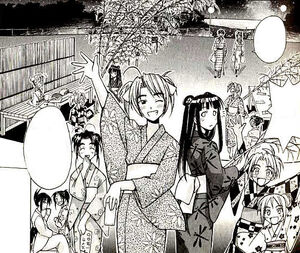 In present-day Japan, people generally celebrate this day by writing wishes on small pieces of paper, and hanging them on bamboo, sometimes with other decorations. The bamboo and decorations are often set afloat on a river or burned after the festival.

The festival originated from the Qi Xi festival in China and was adopted into the Kyoto Imperial Palace during the Heian Period. The festival spread to the general public by the early Edo period and developed into the modern Tanabata festival.

Orihime (織姫, Weaving Princess), daughter of the Tentei (天帝, Sky King), wove beautiful clothes by the bank of the Amanogawa (天の川, Milky Way). Her father loved the cloth that she wove and so she worked very hard every day to weave it. However, Orihime was sad that because of her hard work she could never meet and fall in love with anyone. Concerned about his daughter, Tentei arranged for her to meet Hikoboshi (彦星, Cow Herder Star) who lived and worked on the other side of the Amanogawa. When the two met, they fell instantly in love with each other and married shortly thereafter. However, once married, Orihime no longer would weave cloth for Tentei and Hikoboshi allowed his cows to stray all over Heaven. In anger, Tentei separated the two lovers across the Amanogawa and forbade them to meet. Orihime became despondent at the loss of her husband and asked her father to let them meet again. Tentei was moved by his daughter’s tears and allowed the two to meet on the 7th day of the 7th month if she worked hard and finished her weaving. The first time they tried to meet, however, they found that they could not cross the river because there was no bridge. Orihime cried so much that a flock of magpies came and promised to make a bridge with their wings so that she could cross the river. It is said that if it rains on Tanabata, the magpies cannot come and the two lovers must wait until another year to meet.

Add a photo to this gallery
Retrieved from "https://lovehina.fandom.com/wiki/Tanabata_Festival?oldid=14583"
Community content is available under CC-BY-SA unless otherwise noted.