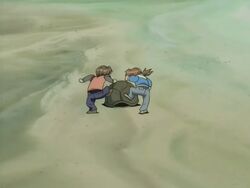 Taro Urashima is a Japanese legend about a fisherman who rescues a turtle and is rewarded for his kindness with a visit to the palace of the Dragon God under the sea. He stays there for three days and, upon his return to his village, finds himself 300 years in the future.

Some Love Hina characters, specifically Keitaro Urashima, Mutsumi Otohime and Tamago Onsen have their character designs influenced by the story. Keitaro even has a dream during one stage of the story where specific events from the legend occur.

One day a young fisherman named Taro Urashima is fishing when he notices a group of children torturing a small turtle. Taro saves the turtle and lets it to go back to the sea. The next day, a huge turtle approaches him and tells him that the small turtle he had saved was the daughter of the Emperor of the Sea, Ryūjin, who wants to see him to thank him. The turtle magically gives Taro gills and brings him to the bottom of the sea to the Palace of the Dragon God. There he meets the Emperor and the small turtle, who was actually a lovely princess named Otohime.

Tarō stays with her in the palace, ate at a big feast, watched the fish dance, and enjoyed the enchanted land for three days, but soon wants to go back to his village and see his aging mother, so he requests Otohime's permission to leave. As a parting gift, she gave him a Tamatebako box with explicit instructions to never open it.

Taro then returned home, but to his dismay, all that he once knew had changed. He did not recognize the people, the buildings, or anything at all. He came across an old man, and asked him if he had ever heard of Urashima Taro. The man replied that he had heard of him, that he had gone to the sea 300 years ago and never returned.
With time he grew very depressed, and decided to see what was in the box. When he opened the box, a white puff of smoke escaped, and he was transformed into an old, white haired man. The time that had passed while he was at the palace was great, and Otohime had stored his old age away in the Tamatebako, which Urashima Taro released.

Retrieved from "https://lovehina.fandom.com/wiki/Taro_Urashima?oldid=13973"
Community content is available under CC-BY-SA unless otherwise noted.