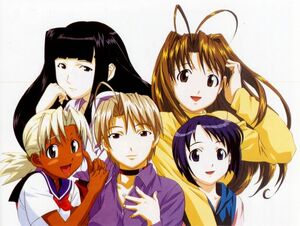 Keitaro Urashima is not usually refered to as a "resident" due to his status as the landlord and a similar reason is given to Haruka Urashima, who is the unofficial den mother. Sarah McDougal is also not included as she is not a long-term tenant.

Retrieved from "https://lovehina.fandom.com/wiki/The_Hinata_Residents?oldid=14501"
Community content is available under CC-BY-SA unless otherwise noted.