The "Thugs" are an intimidating group of men that make various appearances throughout the series of Love Hina, usually as random encounters. 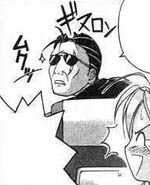 Retrieved from "https://lovehina.fandom.com/wiki/Thugs?oldid=13990"
Community content is available under CC-BY-SA unless otherwise noted.