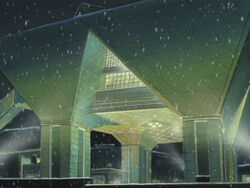 The Tokyo International Exhibition Center (also known as the Tokyo Big Sight) is an iconic convention center located in the Odaiba district of Tokyo Bay in Tokyo.

While the exhibition center is most famously known for the Conference Tower on its roof; an eight story construct that resembles four inverted pyramids sitting atop four tower supports, the center also possesses two other buildings (the East Exhibition Hall and West Exhibition Hall) that also contain convention halls.

The center is famous for hosting various anime, manga and videogame conventions such as Comiket and the Tokyo International Anime Fair (TAF).

The Tokyo International Exhibition Center is based on the real life location.

Retrieved from "https://lovehina.fandom.com/wiki/Tokyo_International_Exhibition_Center?oldid=12185"
Community content is available under CC-BY-SA unless otherwise noted.