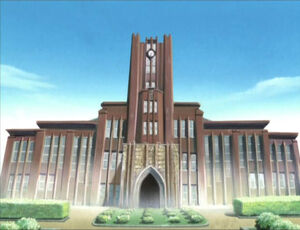 "Hey, did you know that if two people who love each other go to Tokyo University, they’ll live happily ever after?"
—

The University of Tokyo (東京大学 Tōkyō daigaku), also known as Tokyo University, Tokyo U, and sometimes abbreviated as Todai (東大 Tōdai), is a major research university located in Tokyo, Japan. Considered to be the most prestigious university in Japan, the University has 10 faculties with a total of around 30,000 students (2,100 of whom are foreign). Its five campuses are in Hongō, Komaba, Kashiwa, Shirokane and Nakano (all of which are separate districts in Tokyo). It ranks as the highest in Asia and third in the world in 2009 according to Global University Ranking.

The university was originally founded as the “University of Tokyo” by the Meiji government in 1877 by amalgamating together older government schools such as the Astronomy Agency, the Shoheizaka Study Office and the Western Books Translation Agency. It was renamed the “Imperial University” (帝國大學 Teikoku daigaku) in 1886, and then the “Tokyo Imperial University” (東京帝國大學 Tōkyō teikoku daigaku) in 1887. In 1947, after Japan's defeat in World War II, it re-assumed its original name.
With the start of the new university system in 1949, Todai began to expand; swallowing up the former First Higher School (making it the Komaba campus) and the former Tokyo Higher School, (which assumed the duty of teaching first and second-year undergraduates), while the faculties on Hongo campus (the main campus) took care of third and fourth-year students.

The Hongo campus is the main campus of the University of Tokyo. Located near Ueno Park, it occupies the former estate of the Maeda family (Feudal lords during the Edo period). One of the university's best known landmarks, Akamon (the Red Gate), is a relic from this era.

One of the five campuses of the University of Tokyo, the Komaba Campus, located near Shibuya, is home to the College of Arts and Sciences, the Graduate School of Arts and Sciences, the Graduate School of Mathematical Sciences, and a number of advanced research facilities and campus services. This is the campus where the freshmen and sophomores (First-year and Second-year students) of the University of Tokyo study.
The University of Tokyo is the only university in Japan which has a system of two years of general education before students can choose and move on to special fields of study. The Komaba Campus is the cornerstone of general education, and was designated as the "center of excellence" for three new areas of research by the Ministry of Education and Science.
In the anime, Naru and Keitaro took their entrance exams at this campus. It is also here that, in the anime, Keitaro first encounters Noriyasu Seta and Mutsumi Otohime.

Retrieved from "https://lovehina.fandom.com/wiki/Tokyo_University?oldid=15365"
Community content is available under CC-BY-SA unless otherwise noted.