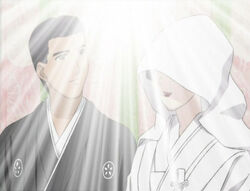 Tsuruko's Husband is an unnamed man whom Tsuruko Aoyama courted and eventually married. A warrior who is part of an organization of demon hunters, upon their marriage, Tsuruko was allowed to pass on the responsibilities of running the Shinmei-ryu Dojo to her sister, Motoko Aoyama. However, Motoko, upset over her sister's wedding and leaving the way of the warrior to become a housewife, refused to accept her inheritance and fled to live in Hinata instead.

In the anime, Tsuruko's husband became a key part of Motoko's psychosis against men and femininity as she saw her sister's example of leaving the dojo for love as a woman becoming weak. She also felt that the man had taken her sister, whome she had previously idolized, away from her.

Retrieved from "https://lovehina.fandom.com/wiki/Tsuruko%27s_Husband?oldid=15920"
Community content is available under CC-BY-SA unless otherwise noted.