The Turtle Civilisation, known as Pararontas in the anime, is an ancient empire built around the worship of turtles. Thought to have existed amongst the South Pacific archipelago islands, Noriyasu Seta and his teacher, Nyamo Namo’s grandfather, have spent their time researching the civilisation as their life’s work.

As the legend goes, there was once a fanatical religious cult that worshipped a turtle god called Namusan Sapou. It was said that the god would feast on young virgins as snacks, uttering the holy cry “Myah”.
A lot of cultures and countries to some degree have shown evidence to have looked up to or worshipped turtles at some point and the south pacific islands Pararakelse and Molmol are located at the centre of this “Turtle Civilization”. 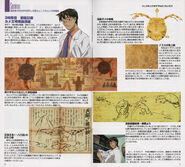 Retrieved from "https://lovehina.fandom.com/wiki/Turtle_Civilization?oldid=10622"
Community content is available under CC-BY-SA unless otherwise noted.