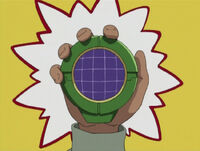 Created by Su in preparation for her “final battle against Tama”, this radar is designed to lock onto turtles and display their location onscreen. Su later modifies the radar to also detect Keitaro and uses it to track him on Pararakelse Island.

Further modifications saw the radar being able to detect Hot Springs and being able to follow a tracking device which allowed Keitaro to follow Naru through northern Japan.

The Turtle Radar appears as the ingame map for Love Hina: Smile Again.

Retrieved from "https://lovehina.fandom.com/wiki/Turtle_Radar?oldid=15696"
Community content is available under CC-BY-SA unless otherwise noted.