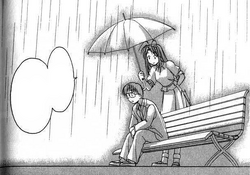 The Umbrella of Togetherness refers to a romantic image stemming back to when it was not considered appropriate for a young woman to be seen in public with a man who was not a family member.
The one exception to this rule was during a rainy day, when a man could offer to share his umbrella with a young maiden in the street if she hadn't one herself. This image of a man and a woman sharing an umbrella in the rain translated itself into romantic imagery that still persists through various media.

Retrieved from "https://lovehina.fandom.com/wiki/Umbrella_of_Togetherness?oldid=14162"
Community content is available under CC-BY-SA unless otherwise noted.