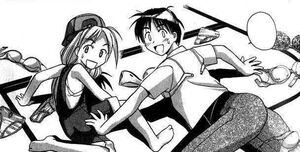 Underwear, also known as Undergarments, are clothing items designed to be worn under other clothes to keep garments from being soiled by bodily secretions and discharges as well as to provide additional privacy and/or support for the wearer. Underwear can also aid in shaping and supporting the body.

Some items of clothing are designed as underwear, while others such as T-shirts and certain types of shorts are suitable both as underwear and as outer clothing. The suitability of underwear as outer clothing is, apart from the indoor or outdoor climate, largely dependent on societal norms, fashion and the requirements of the law. If made of suitable material, some underwear can serve as nightwear or swimsuits.

Women's brassieres provide support for the breasts. The first bra was patented by Mary Phelps-Jacobs in 1914, who was aided by her French maid in sewing two silk handkerchiefs together, with baby ribbon sewn on to make straps and a seam set in the front.

Women may wear sports bras which provide greater support, thus increasing comfort and reducing the chance of damage to the ligaments of the chest during high-impact exercises such as jogging.

Panties evolved from the Bloomers; a female-centric undergarment designed to cover the wearer's crotch in the mid-19th century. In the 1920's, women's underwear shortened to accomodate for shorter skirts and outergarments, gradually evolving into the modern "Briefs" design.

Briefs are a type of short, tight underwear that covers the genital region of men and women. First sold on January 19, 1935 by Coopers, Inc., in Chicago, Illinois, the male Brief was designed to support the male genitalia more effectively than Boxer shorts. This made Briefs a popular underwear choice for men who were participating in athletic activities.

Boxer Shorts are a type of loose shorts typically worn by men.
Boxer Shorts were originally designed in 1925, by Jacob Golomb who designed elastic-waist trunks to replace the leather-belted trunks then worn by boxers. These trunks immediately became famous, but were later eclipsed by Briefs beginning in the late 1930s until around 1947, when boxer shorts started to gain in popularity again.

A corset may be worn as a foundation garment to alter a woman's body shape.

Underwear may also be used to preserve the wearer's modesty – for instance, some women wear camisoles and slips under clothes that are sheer.

Retrieved from "https://lovehina.fandom.com/wiki/Underwear?oldid=14812"
Community content is available under CC-BY-SA unless otherwise noted.