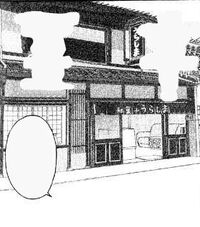 The Urashima Confectionary Store (Wagashi Urashima) is a renowned candy store owned and run by Keitaro Urashima and Kanako Urashima’s immediate family.
Appearing only in the manga, Keitaro’s parents used to pressure him into quitting schooling and taking over the family business of running the store. His persistence in studying for Tokyo University put some strain on their relationship and his continued instance of studying instead of working, even after failing the entrance exam twice, caused him to be thrown out the house.
It is considered an irony by Kanako that she grew up in a candy store despite not liking sweets.

The Urashima Confectionary Store is based on a specialty sock store in the Nakagyo district of Kyoto. The store was founded 130 years prior to Love Hina.

Retrieved from "https://lovehina.fandom.com/wiki/Urashima_Confectionary_Store?oldid=14765"
Community content is available under CC-BY-SA unless otherwise noted.