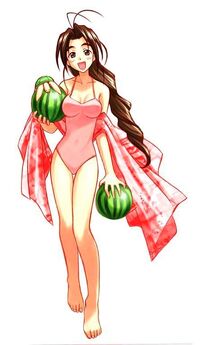 The Watermelon is both the name of a fruit and plant originating from southern Africa.
The watermelon fruit, considered a type of melon, has a smooth exterior skin (green, yellow and sometimes white) and a juicy, sweet interior flesh (usually pink, but sometimes orange, yellow, red and sometimes green if not ripe).

It is not known when the plant was first cultivated, but Zohary and Hopf note evidence of its cultivation in the Nile Valley from at least as early as the second millennium BC. Although watermelon is not depicted in any Egyptian hieroglyphic text nor does any ancient writer mention it, finds of the characteristically large seed are reported in Twelfth dynasty sites; numerous watermelon seeds were recovered from the tomb of Pharaoh Tutankhamun.

By the 10th century AD, watermelons were being cultivated in China, which is today the world's single largest watermelon producer. By the 13th century, Moorish invaders had introduced the fruit to Europe; according to John Mariani's The Dictionary of American Food and Drink, "watermelon" made its first appearance in an English dictionary in 1615.

Retrieved from "https://lovehina.fandom.com/wiki/Watermelon?oldid=15036"
Community content is available under CC-BY-SA unless otherwise noted.