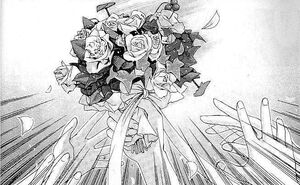 A Wedding Bouquet is a collection of flowers in a creative arrangement traditionally held by the bride during a Wedding Ceremony.

After the wedding the bride would toss the bouquet over her shoulder towards an amassing of prospective woman and men. It is believed that whoever catches the bouquet is the next in line to be married.
This practice may be related to the Golden Apple of Discord myth where, in Greek mythology, a golden apple was rolled into a wedding celebration by Eris, goddess of discord. The attending goddesses Hera, Athena, and Aphrodite saw the apple and began to quarrel over who it was intended for, with the recepient of the apple being known as the "fairest" of the three.

In ancient Greece, Zeus held a banquet in celebration of the marriage of Peleus and Thetis (parents of Achilles). However, Eris, goddess of discord was not invited, for she would have made the party unpleasant for everyone. Angered by this, Eris arrived at the celebration with a golden apple from the Garden of the Hesperides, which she threw into the proceedings, upon which was the inscription "For the fairest one".
Three goddesses claimed the apple: Hera, Athena and Aphrodite. They asked Zeus to judge which of them was fairest, and eventually he, reluctant to favour any claim himself, declared that Paris, a Trojan mortal, would judge their cases.

Thus it happened that, with Hermes as their guide, the three candidates bathed in the spring of Ida, then confronted Paris on Mount Ida. Each goddess wanted to be judged the fairest, so they each undressed and presented themselves to Paris naked, in hopes of appearing more sexual than the other two. While Paris inspected them, each attempted with her powers to bribe him; Hera offered to make him king of Europe and Asia, Athena offered wisdom and skill in war, and Aphrodite, who had the Charites and the Horai to enhance her charms with flowers and song, offered the world's most beautiful woman; Helen of Sparta, wife of the Greek king Menelaus.
Paris accepted Aphrodite's gift and awarded the apple to her, receiving Helen as well as the enmity of Hera, Athena and the Greek nation for taking their queen. The Greeks' expedition to retrieve Helen from Paris in Troy is the mythological basis of the Trojan War. 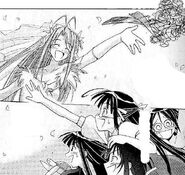 Retrieved from "https://lovehina.fandom.com/wiki/Wedding_Bouquet?oldid=11129"
Community content is available under CC-BY-SA unless otherwise noted.