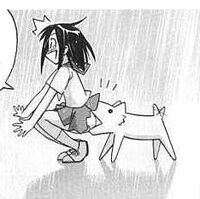 The White Dog is a random white dog in the Akamatsuverse who appears and attacks characters who are suffering a series of depressive experiences. Usually acting as one of those depressing experiences.

At various stages Motoko, Shinobu and Keitaro are all attacked by the white dog; Motoko after she overhears how her attempt at being a maid in Hinata House after being disowned by her family is not liked by the Hinata residents, Shinobu after receiving a fail in her school exam and Keitaro while following Naru to her teaching job.

The dog makes a brief, final appearance on one panel as Keitaro and Ema Maeda drive back to the Hinata House in the manga's final Epilogue chapter. 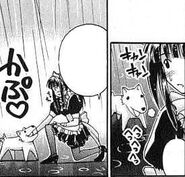 In A.I. Love You after being tricked and shamed by the girl he had been pining for in class, Koube is chased by the white dog after being promised discplinary action from Nitta, realizing his lack of appeal to girls, and being caught in the rain with a broken umbrella.

Retrieved from "https://lovehina.fandom.com/wiki/White_Dog?oldid=14574"
Community content is available under CC-BY-SA unless otherwise noted.