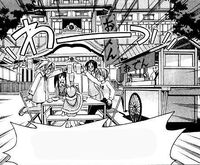 Yatai is a mobile food stall in Japan that typically sells ramen or similar food and drinks such as beer and sake depending on the location.

Appearing as early as 1710 where they appeared amongst the city pleasure districts, Yatai were developed to serve as cheap and fast alternatives to restaurants and became popular during the Meiji period (1868-1912) when they were two-wheeled pushcarts constructed of wood. In modern times, when not selling foods to spectators during festivals, Yatai are generally set up in the early evening on pedestrian walkways to catch the afternoon commuters and removed before morning commuters begin to fill the streets. 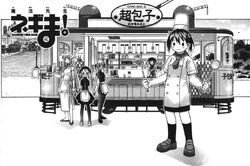 Retrieved from "https://lovehina.fandom.com/wiki/Yatai?oldid=14675"
Community content is available under CC-BY-SA unless otherwise noted.